Everton are set to meet with Denzel Dumfries within the week to persuade the player to make the move to Goodison Park this summer.

That’s according to Gazzetta Dello Sport, who say the Toffees may have an advantage over Inter in the race for the Dutchman.

Dumfries has been heavily linked with a move to Everton all summer, with it made clear before the Euros that Marcel Brands was a big fan of the player.

His impressive displays for the Netherlands only strengthened their interest, but it also meant increased competition, with Inter also keen on the full-back as a replacement for Achraf Hakimi.

Indeed, it appeared they were at the front of the queue, but Gazzetta Dello Sport say Everton might have some increased convincing power in the race.

According to them, Inter are in an ‘open duel’ with Everton for Dumfries and have been getting information on him for some time.

However, they are ‘frightened’ by PSV Eindhoven’s €20m asking price, a figure which is considered ‘not practicable’ for the Nerazzurri.

That is not the case for Everton, who have a ‘spending power’ that Inter do not and are keen to exercise it to get a player that manager Rafa Benitez has explicitly asked for. 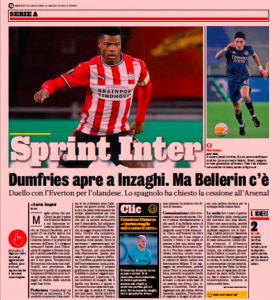 Indeed, they have ‘moved heavily’ to grant the Spaniard his request and a meeting is planned with Dumfries and his agent Mino Raiola to convince him about the move.

In this regard, Inter hold the upper hand as Dumfries has made it clear he would prefer to go to Italy, but it’s debatable how much power that will hold, particularly if Everton can offer the money PSV want.

They’ve never been open to a loan deal with a right to buy, which is what Inter want, and that could lead the Italians to pursue an easier deal for Arsenal’s Hector Bellerin instead, leaving the path to Dumfries free for the Blues.