Home Europe Everton one of the clubs ‘sounding out’ Barcelona over wideman – He...
SHARE

Everton have sounded out Barcelona about a possible move for right-back Emerson this summer.

That’s according to Mundo Deportivo, who report that Catalan giants are open to the possibility of selling the Brazilian this summer.

Emerson, signed in a joint deal with Betis from Clube Atlético Mineiro in July last year, has been spending the season on loan at the Seville club since.

The plan was for him to stay there for two-years, but he has become a ‘sought-after’ player, and now Barcelona are considering a sale.

They are aware there is plenty of interest in him around Europe and are now working on a sale to boost their coffers this summer.

The Premier League is a potential landing ground for him with clubs there ‘sounding out’ a possible move and Everton are one of them. Borussia Dortmund are also keen as they need a replacement for Achraf Hakimi, who has joined Inter Milan.

They are keen to sign a right-back this summer as they look for a long-term replacement for Seamus Coleman and were linked with a move for Emerson on several occasions over the last year.

Mundo insist that interest is genuine, but they have not ‘moved a formal offer’ at this stage as far as the newspaper is aware.

Should they do so, there is a little confusion about what sort of asking price Barça would command as the contractual situation shared between them and Betis has always been murky.

What is clear is the ‘co-ownership’ is equal, and the player has a deal with Barcelona until 2024, with them holding an option to sign him fully for €9m either this summer or next. 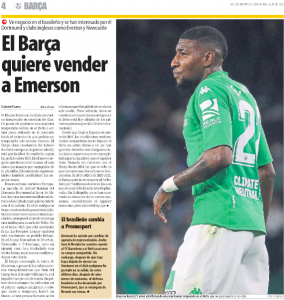 Therefore, it’s easy to assume they would be asking for anything more than that to ensure they make a profit from any potential deal.

On the face of it, though, it’s one Everton would do well to pursue. At 21-years-old, he fits perfectly into Marcel Brands’ strategy and solves a problem position.

Brands also has a good relationship with Barcelona after signing Yerry Mina, Lucas Digne and André Gomes from the Nou Camp in recent years, meaning negotiating a reasonable price should be an easy task for him.

The question is whether Emerson would want the move. Mundo say he does ‘not rule out’ an exit but his ‘first desire’ has always been to return to Barça and shine there.

However, he is also keen to be playing European football, something Everton cannot offer at this moment in time unless they are able to secure a Europa League place before the end of the season.