Last night we brought you news, via Sport, that Barcelona had opened negotiations with Manchester City over defender Eric Garcia.

The news was surprising, to say the least, coming out of nowhere with the newspaper stating a deal could end up being ‘the big surprise of the summer’.

Well, Sport have followed up on their original report today and gone all in, with Garcia on the cover of the newspaper and featuring on the four first pages to boot.

The newspaper reiterates their belief he could be a ‘surprise’ transfer this summer and insist that negotiations between Manchester City and Barcelona are well underway.

Barça have ‘informed’ City they want the Catalan centre back and, because his contract ends next summer, City have ‘opened the door’ to the negotiation as well.

However, these talks are still at an ‘early stage’ at the moment and neither side has found the ‘right formula’ for a deal yet.

It’s explained that Barcelona hadn’t lost track of the player since he left their La Masia academy to join City and have even watched his development ‘with a magnifying glass’ in recent years.

They’ve been left ‘amazed’ by the growth he’s shown under Pep Guardiola and thus ‘did not doubt’ for a second when making their move to re-sign him. 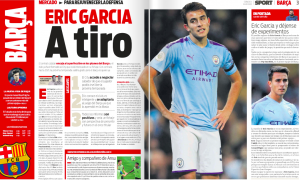 They believe capturing Garcia would be a strategic move on their part, securing a player for the present and the future.

Sport are enthusiastic about their chances but insist a transfer will not happen ‘immediately’ largely due to Manchester City still competing on several fronts.

Guardiola would prefer to get any business done after the season, including their Champions League fixtures, is finished, so he doesn’t destabilise his team.

Barcelona’s ‘delicate economic situation’ also makes things difficult, so much so that if they can’t agree on a fair price with City, the club ‘would go with everything’ to secure the defender on a free next summer instead.