Everton are one of the clubs interested in the signing of Chancel Mbemba, according to reports from the Portuguese media today.

Newspaper A Bola writes that the defender, whose contract with Porto is running out this summer, now has several options on the table to continue his career at.

Everton are one of the ‘most recent competitors’, along with the likes of Fiorentina and Trabzonspor, while the likes of Lyon, Olympique Marseille, Milan and Betis had already been linked before.

Mbemba is said to be waiting for the offers until he chooses the ‘next step’ he’ll take. 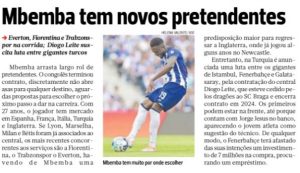 It turns out there’s a reason why Everton could have an advantage in this race.

That’s because the defender, who played for Newcastle United in the past, shows a ‘bigger predisposition’ to return to England.

Now as Mbemba waits for the offers, we sit and see if the Toffees are really coming for him.

He was a regular starter in Porto’s league-winning campaign, with 31 appearances made.