Over the past couple of days, there was a lot of excitement regarding the future of Destiny Udogie, currently contracted to Udinese, with Tottenham reportedly interested.

In fact, his agents had already met Spurs about a potential deal, with Antonio Conte seemingly keen on working with the 19-year-old.

Then came a chat with Inter following their talks with Tottenham’s Fabio Paratici, as his representatives were spotted entering and leaving the club’s headquarters on Tuesday.

They remained coy when talking to journalists waiting outside, but they didn’t rule out the possibility of Udogie being transferred this summer. 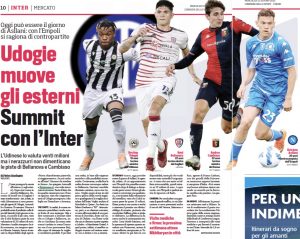 Corriere dello Sport briefly look at the situation on Wednesday, and make it clear to their readers that Inter ‘aren’t the only option’ for the Udinese starlet.

In fact, his agents ‘continue their talks’ with both Tottenham and Juventus, perhaps knowing the pair can offer more than the Nerazzuri.

Don’t worry, Spurs fans, as this is something we’ll be keeping a close eye on.