With Matthijs de Ligt’s transfer to Juventus just around the corner, Mino Raiola will soon be able to focus his attention on another one of his clients’ future: Moise Kean.

The young forward was touted as possibly being inserted in a deal for the Dutchman, but with that out of the equation, and Ajax not interested in a standalone transfer, Everton and Borussia Dortmund are the two left to battle it out.

At least, that’s what Gazzetta dello Sport are reporting on Tuesday, claiming the Toffees and the Bundesliga side are the ‘main candidates’ to acquire his services.

Kean only has one year left on his contract in Turin, and while talks for a new deal have taken place, no agreement has been found just yet. 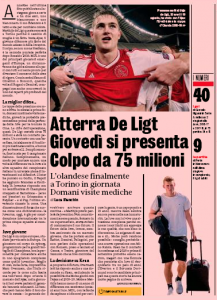 If that remains the case heading into the final weeks of the transfer window, an exit strategy will need to be sorted for fear of losing him on a free, and Gazzetta explain he could be sold, ‘maybe with a formula that would allow Juventus to buy him again in a couple of years’.

That might be something Everton consider, especially if they know they can make a good profit down the line from the sale, but as the Italian newspaper put it, we aren’t there yet and ‘this story has many pages left in it’.