Ole Gunnar Solskjaer was present on Saturday as Atletico Madrid put in a good performance against Barcelona, only to lose 2-0 after late goals from Lionel Messi and Luis Suarez.

Regardless of all the claims that Manchester United’s manager may have been there to watch one of the handful of Atletico midfielders linked with Old Trafford recently, he was of course actually there to watch Barcelona, and perhaps how the away side would try to blunt their attacks.

That said, he can’t have failed to notice a brilliant display from Jan Oblak.

Marca say there can now be little argument, 26 year old Oblak is the most reliable goalkeeper on the planet.

Some Manchester United fans may disagree, putting arguments forward for their own David De Gea. The 28 year old Spaniard only has a year left of contract after this season and that means his future is very much under question.

Marca states that should De Gea leave, then there’s one man who is the ‘priority objective’ at the Premier League club, and that’s Oblak. Solskjaer is now more convinced, after watching such a good performance closely. 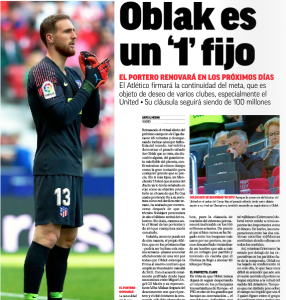 Going over interest in the goalkeeper, they state he’s an ‘object of desire’ for several clubs, ‘especially Manchester United’.

Atletico are expected to soon announce a renewal for their much wanted stopper, but there’s a very important point with that, say Marca: Oblak’s clause will remain at €100m.