Wolves may have something to worry about regarding Miguel Angel Rios, described by Mundo Deportivo as the club’s head of European scouting.

Espanyol are currently looking for a new manager and Director of Football for next season and have contacted the Wolves man. It’s explained that Miguel Angel Rios’ background is appreciated, including spells at both Fulham and Brentford.

His training, we assume academic, is said to have specialised in football finance, grassroots, and bringing players through from the ‘quarry’.

That’s what a youth system is called in Spain, and is a good clue of the task that would be ahead of the Wolves man should he become Director of Football at Espanyol. 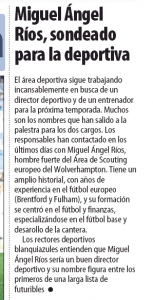 Premier League promotion means Wolves are an attractive prospect, it’s not too hard to argue they’re more attractive than Espanyol, who will look to sell one of their stars this summer to help balance the books.

What may be a problem is if Miguel Angel Rios feels he’d be moving to a more senior role with more power at Espanyol, and is then tempted to leave his role with Wolves.