Torino’s chase for Watford star Roberto Pereyra isn’t something new, since the club have been trying to take him back to Turin for a while.

But now the Serie A side have a good argument to take him away from the Hornets, according to newspaper Tuttosport today.

The outlet points out Torino, who are waiting to see if a ban to Milan could send them to the Europa League, which Watford missed on when losing the FA Cup to Manchester City, could use said spot to convince Pereyra to sign.

Pereyra is said to want to play in a European competition next season, and is reportedly a primary target for the Turin side this summer, although a transfer fee and his wages would still need to be discussed. 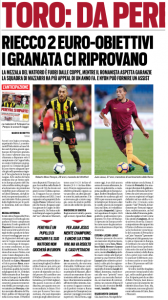 Besides the potential Europa League spot, Torino also have manager Walter Mazzarri on their side, who has previously worked with Pereyra at Watford and whom the player likes a lot.

Still, the midfielder’s relationship with the Hornets is said to be very good, so the Serie A side would have to work hard on convincing him to switch sides.

Would a place in the Europa League be enough?