Despite Chelsea signing Emerson Palmieri towards the end of the January transfer window, there’s been more than one claim they also moved for another left back once the AS Roma deal had been agreed.

With Marcos Alonso also at the club it seems over the top, but there’s been claims from more than one country that Chelsea remain keen on bringing someone else in for the position, perhaps facilitating an exit for the Spaniard.

On Saturday, A Bola report Chelsea offered ‘around €20m’ for Alex Telles in the January window, only to see Porto knock that offer back. The Brazilian has a release clause of €40m and if clubs swoop in as expected in the summer it’s going to be difficult to keep Telles at the club.

Long linked with Chelsea, the 25 year old has been progressing well in Portugal since moving from Galatasaray in the summer 2016 transfer market. 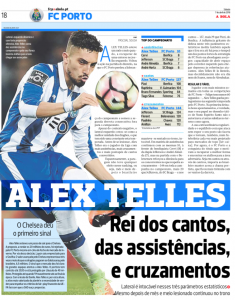 In the summer 2017 transfer window Telles was also linked with Chelsea, and Sport Witness spoke to the player’s agent about the situation.

Fernando Otto told us: “When he went to Galatasaray, we had an offer from Chelsea for Alex. But at the time, we had already confirmed a pre-contract with Galatasaray, and we could not go back.

Will that one day be this summer? It could be, but Chelsea will need to up their €20m offer.