Argentine winger Nicolas Gaitán could be on his way out of Atletico Madrid, AS reports today.

Unhappy with his little playing time, the player would be seeking another destination in order to convince national team manager Jorge Sampaoli that he still deserves a place in the World Cup squad.

When listing the possible destinations, AS claims that Gaitan’s agent José Iribarren has received approaches from England, France, Italy and Argentina.

The only club mentioned is Boca Juniors, but that sounds an unlikely option as the Argentine side would only have the condition to bring him on a loan deal. 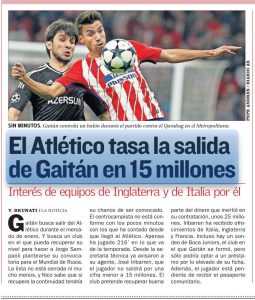 AS claims that Atletico Madrid have already decided that €15m is the minimum price for him to leave, as they want to recover at least part of the €25m paid last year.

Now we won’t just guess which Premier League club have made an enquire for him, but Southampton are a side who should be considering this signing.

Previously linked to Lucas Vietto, who would be a much more expensive purchase, the Saints have been struggling to have a man to play on the wing, currently using James Ward-Prowse down the right.

England was always seen as an objective for Gaitán, and by working on his departure from Atletico, he’s pratically being delivered on a plate at this price.

Now it’s up to Southampton to see if he’s worth it. But they would probably have to trust him for his past than considering his recent form, as he isn’t getting many chances.