Home Europe “With all due respect…” – Newspaper shows pros and cons of potential...
SHARE

Sounding very optimistic about the move, the outlet wrote that Wolves are expected to soon present an offer for the 26-year-old, who could finally fulfil his dream of moving to the Premier League.

It turns out that in another section from the newspaper, in which they traditionally take a controversial subject and feature quotes from journalists who have different opinions on the matter, the transfer is again covered.

Record writes that Wolves are currently ‘the favourites’ to buy Palhinha, and ask if a move to the Molineux would be the ‘adequate destination’ for the Sporting player.

The first opinion is from Rafael Soares, who points out that Bruno Lage’s side would suit the midfielder well.

“Palhinha has already expressed the desire to play in the Premier League and has important characteristics, mainly due to the range of action he’s able to cover, to succeed at Wolverhampton.

“It is, by the way, a club that has even fought to be in European competitions. However, with the ball, Palhinha is far from the elite. Other clubs like Man. City, Liverpool and Chelsea are already well served in the position.” 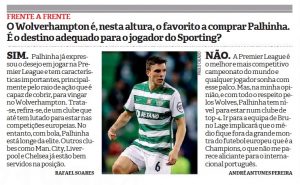 André Antunes Pereira, however, pointed out that Palhinha deserves more, and should try to move to a club who can fight for bigger things.

“The Premier League is the best and most competitive league in the world, and every player dreams of this stage. But, in my opinion, and with all due respect to Wolves, Palhinha has the level to be in a top four club.

“Going to Bruno Lage’s team will mean that the midfielder stays out of the great showcase of European football that is the Champions League, which I don’t think is attractive for the Portuguese international.”