In search of a prominent role and more game time, Barcelona’s Philippe Coutinho joined Aston Villa on a loan deal in the January window. The Premier League side have an option to make his stay permanent for €40m in the summer.

The 29-year-old enjoyed a good start to his life with Villa, managing three goals and three assists from first six matches. Since then, he has failed to score or register an assist.

Earlier this month, Sport reported Aston Villa will have a ‘month to decide’ whether or not to buy the attacking midfielder.

At the weekend, Steven Gerrard publicly expressed his desire to retain the ex-Liverpool star beyond his loan deal.

Aston Villa are set to fulfil their manager’s wish as Mundo Deportivo on Tuesday state the English club have now made a decision to convert the Brazil international’s loan deal into a permanent transfer.

Gerrard has ‘pushed hard’ to retain Coutinho and the deal now seems to have worked out in his side’s favour. 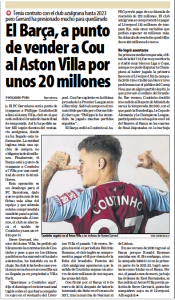 It’s claimed the Catalan club are ‘about to transfer’ the player to the English club. Mundo found out about this from ‘sources from the Barca dressing room, where this information already arrived’.

Aston Villa had an option to make Coutinho’s deal permanent by paying €40m to the La Liga side. Xavi Hernández’s side, however, will transfer the South American to Villa Park for a fee between €15-20m.

Gerrard has been keen on this deal and if Mundo’s report is to be believed, Villa have succeeded in reducing the price tag to keep Coutinho at the club.

On Monday evening, claims came from Brazil that Newcastle United would be prepared to pay the full €40m, so there may still be developments on this.