On Wednesday, we covered the latest from Milan and their interest in Southampton’s Manolo Gabbiadini, who has fallen out of favour at St Mary’s of late.

With the Serie A side trying to bolster their attack, the Italian, who can play through the middle or down the wings, would provide Gennaro Gattuso with a versatile option, capable of both scoring and occasionally scoring goals.

The forward’s agent even travelled to England to try and sort something out.

However, Southampton’s reluctance to let him go for anything other than a full transfer was problematic for Milan, who aren’t in a position to put €12m on the table, but that’s not their only worry. 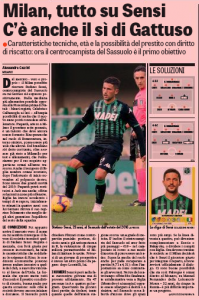 According to Thursday’s Gazzetta dello Sport, the Serie A club would like someone who can potentially play down the left hand side of the attack, and while Gabbiadini can play there, it’s not his best position.

The Italian newspaper explain the 27-year-old has found better form through the middle and down the right (like he did at Napoli) throughout his career than one the other side of the attack, leaving them a bit in a bind.

That’s why the newspaper offer Yannick Carrasco as a potential alternative, as the Belgian has started attracting interest from Europe again.