Thomas Vermaelen’s claims in an a Belgian interview last week continue to be rubbished by the Spanish media, and reacted to with some bemusement.

Barcelona defender Vermaelen told DH: “The board told me they needed four centre-backs. I didn’t have a choice but to stay. Clubs tried until the very last day, like Everton, but it was impossible. I wasn’t even able to negotiate.”

It was suggested the only way Everton, and other clubs, could have signed Vermaelen from Barcelona would have been to pay the player’s €80m release clause.

On Sunday, Mundo Deportivo said: ‘Either he didn’t express himself well or what he said in his interview wasn’t understood.’

Marca get in on the act in their Monday edition, and make it clear that the doors are very much open for Vermaelen to leave Barcelona, with the problem being a lack of offers rather than approaches being knocked back. 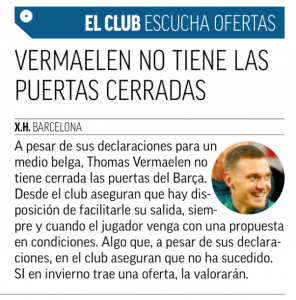 Barcelona insist ‘there is provision to facilitate his departure, as long as the player comes with a proposal to meet conditions’, say Marca, before adding ‘despite his statements, the club insist that’s something which hasn’t happened’.

If an offer arrives in January, Barcelona will be happy to ‘evaluate it’.

That leaves the the opportunity very much open for Everton, and if Vermaelen wasn’t exaggerating things, and Ronald Koeman did really want him, a Goodison Park arrival in January is certainly possible.

Barcelona will consider an offer from Everton.