Home Europe “We don’t have to hide” – Player ‘positive’ about facing Liverpool after...
SHARE

RB Leipzig defender Willi Orban has urged his side not to fear Premier League champions, Liverpool, when they meet in the Champions League.

The German side are set to take on Jürgen Klopp and his team in the first leg of their Champions League last 16 clash next week in Budapest, with the game having been moved due to Coronavirus restrictions in Germany.

It will be the first meeting between the two sides in this competition in a game that many are expecting to be an exciting one given their similar styles of attacking, forward-thinking football.

Liverpool will head into the game as the favourites given their status as Premier League champions and their European pedigree.

However, they will face an RB Leipzig side who once again find themselves competing for the Bundesliga title and keen to recreate last season’s success, when they reached the semi-finals of the competition.

Indeed, they are in much better form than Liverpool at this moment in time, and Orban has insisted they have nothing to fear from their opponents.

“I like to watch good football and therefore watch Premier League games,” he told Kicker.

“I would have seen Liverpool’s 1:4 on Sunday against Manchester City the same way, just a bit more consciously this time. But for now I’m fully focused on Augsburg. 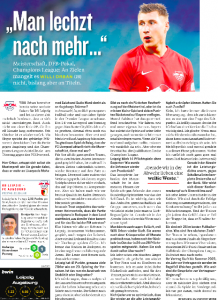 “For almost all the really big teams that have played outstandingly in the last few years, it is incredibly difficult to bring consistency back onto the pitch in these times.

“Liverpool have also had a lot of bad luck with injuries. With this tight fixture list, it’s certainly not easy to compensate for that at the top level.

“But they still have brutal quality in their squad. Still, we don’t have to hide, I am in a positive mood.”