Home Europe “Don’t focus on my future at all” – Celtic player refuses to...
SHARE

Kristoffer Ajer has over two years left on his contract at Celtic.

Tore Pedersen, the Norway international’s agent earlier said his client will not sign an extension as he plans to leave the Scottish Premiership champions in the next transfer window.

Reports coming out of England have suggested Leicester City are looking at the 21-year-old. On April 3rd, we covered claims from Calciomercato the centre-back has emerged as a priority target for AC Milan.

Two days ago, TV2 in Norway interviewed the defender, and he ‘declined to comment’ on the reports linking him with a move away from Celtic Park.

Another Norwegian newspaper Fædrelandsvennen states Brendan Rodgers’ side and Milan are regularly mentioned as potential destinations for Ajer. A move away from the Bhoys will see Ajer’s former club, IK Start will receive 10 percent of the transfer fee.

When Fædrelandsvennen asked Ajer about the rumours surrounding his future at Celtic, he said: “I have two years left of the contract and do not focus on my future at all. What the media writes, I don’t focus on it.”

Ajer was further asked whether he would be happy if IK Start receive a part of his future transfer fee.

Responding to that, he said: “I hope Start can do financially [well] without that help.” 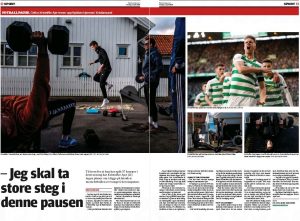 Ajer has given two interviews in the last couple of days to the Norwegian media.

While his agent has publicly talked about the possibility of the defender leaving Celtic in the summer, the player doesn’t want to get involved.