Home Europe “It was over for me” – Player says he was ‘unjustly treated’...
SHARE

Apart from the trio, the Belgian side also signed Wesley Hoedt on a loan deal from Southampton.

After arriving from Lazio for €18m in 2017, the Dutchman was a regular inclusion in the Saints’ starting lineup and made 41 league starts in his first 18 months.

However, things changed for him after Ralph Hasenhüttl replaced Mark Hughes last December.  The 25-year-old wasn’t included in the coach’s plans and was allowed to join Celta Vigo on a temporary deal during the second half of last season.

Belgian newspaper Het Laatste Nieuws has interviewed the centre-back, and he was critical about the Southampton manager and his treatment towards him.

“When Ralph Hasenhuettl took over as Southampton manager, it was over for me. I feel unjustly treated by him somewhere, because suddenly I was pushed out of the way. And that after I played a lot in the year and a half before,” he said.

“At the same time, I will stand in front of the mirror myself. Perhaps I was not top notch at that time.

“You find it strange in Belgium that a player of 18 million ends up at Antwerp? Well, that transfer amount was quite a lot of money at the time. But it didn’t work out as planned.

“Last summer, several options were discussed, but for some reason there was always nothing. At the end Antwerp wanted to take me on loan and I decided to go for it. After a longer period of time when I played less, I want to have a stable season.” 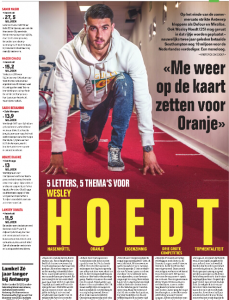 Hoedt spent two years at Lazio where he featured regularly. He admitted to missing Serie A and also gave his view on his decision to join Southampton in 2017.

“At 25, I’ve experienced Serie A, the Premier League and La Liga. Italy has shaped me the most. There, defence is compared to art, and I do miss that,” he added.

“Later I went to Southampton, because of the appearance of the Premier League. So, in retrospect that wasn’t the right move, although I would like to go back to England.”