Over the weekend, we covered a story in Gazzetta dello Sport claiming that Lazio in Italy were considering making a move for Chelsea’s Pedro.

It makes sense on paper, as the Spaniard is out of contract in the summer and has made it clear he wouldn’t be renewing at Stamford Bridge.

That means the world is his oyster, and it will be up to interested clubs to convince him they are the best next step for him in his career.

Well, if Corriere dello Sport on Thursday are to be believed, then Lazio are going to face some very local competition, as AS Roma have also turned their attention to the 32-year-old.

It’s looking increasingly likely that Henrikh Mkhitaryan will be heading back to Arsenal in the summer after his one year loan in Italy’s capital, and Gianluca Petrachi, their director of football, is looking for a cheap but experienced replacement. 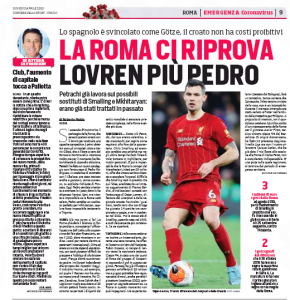 Two names have popped up, the first being Mario Götze, with Pedro the second.

It’s claimed Petrachi has made ‘a new enquiry’ with the Chelsea forward’s entourage, having already tried back in January to no avail, despite him being an ‘explicit request’ of Paulo Fonseca’s.

The belief is that, at this very moment, Pedro ‘seems focused’ on a move to Qatar, where he could team up with Xavi once more, but Corriere explain ‘nothing is impossible’ if Roma act ‘swiftly’ in their moves.