On Janaury 30th, we covered claims from Spain that Barcelona’s Denis Suarez is ‘already in London’ and will undergo medical to complete a switch to Arsenal.

Thursday’s edition of Mundo Deportivo explains, obviously, that the player will become a Gunner today.

Even though there has been no official announcement from either of the club on Wednesday, it’s explained there will be white smoke today and everything is already done.

The former Villarreal man has completed his medical and sources close to the La Liga winners and the player told the Catalan newspaper that the ‘documentation has already been completed’ for Suarez to join the north London club.

Before moving to the Emirates, the 25-year-old signed a one year extension and his new deal at Camp Nou will expire in 2021.

He will join the Premier League outfit on loan and they will have an option to make the deal permanent in the summer for €18m. 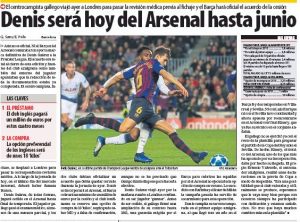 Barcelona will receive a loan fee of €1m and the saga surrounding Suarez, his club and Arsenal will come to an end today.