Atlético Madrid striker Diego Costa is targeting a return against Liverpool in the Champions League.

The Spanish striker has been out for the last two and a half months after recovering from an operation on a thigh injury.

However, he is now back in training, according to Marca, and wants the upcoming clash with Liverpool to be his comeback.

The newspaper reports that his ‘surprising presence’ shows the ‘desire’ of the player to be involved as soon as possible, although the Spanish side are playing it calmly because they know it will take him weeks to ‘get in tune’.

His return to fitness is a significant boost for Atlético, with his return described as ‘fundamental’ to helping turn around their season. 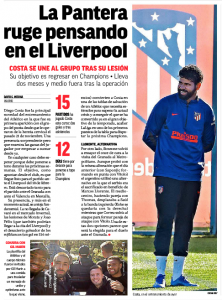 Diego Simeone’s side have been decimated by injuries to their forwards in recent months, with Álvaro Morata and João Félix both out injured.

That had left them looking ahead to the meeting with Liverpool with some concern, and Simeone needing to ‘invent a solution’ to their problem.

Costa’s return could help solve the issue and then some, though, with Liverpool unlikely to relish the prospect of facing their old enemy once again.