On deadline day, Napoli took André-Frank Zambo Anguissa from Fulham on a season-long loan deal with a ‘right of redemption’.

Monday’s edition of Corriere dello Sport have come out with a report, providing further details of the agreement between the Serie A side and the Cottagers.

Cristiano Giuntoli, the sporting director of the Italian club has followed the midfielder from his time at Villarreal. However, a deal then couldn’t take shape due to ‘budgetary reasons’.

The global pandemic has changed the market and with Fulham relegated from the Premier League, the 25-year-old became a ‘luxury’ for the English club.

Napoli tried to take advantage of this situation and decided to take the Fulham owned player on an onerous loan deal of €500,000.

In addition to this, the Cameroon international’s salary is to be shared between the two sides [around €1.5m each] and an ‘acceptable, not ‘exaggerated’ figure of €15m for redemption.

The newspaper states: ‘Once upon a time, perhaps, the rich Fulham bosses would have slammed the door or perhaps politely they would have whispered a “no, thanks”…’ 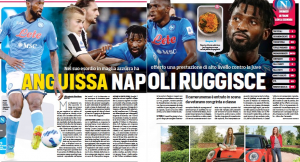 This time, however, ‘the chat lasted a moment’, and they also ‘prepared the medical examinations in great secret’.

If Anguissa shines for Napoli, they may well consider making his stay permanent for an acceptable figure of €15m.