Linked with a move to Crystal Palace as recently as the beginning of April, Adama Soumaoro could be one of the casualties in the summer at Lille if the right offer comes along.

Not outright looking for a move away from the club he captains, the centre-back is, however, ‘open to listening’ in the coming months, as he’s ‘ambitious’ and is increasingly thinking about an exit, having spent the last decade with the same club.

Should he move to England, it’s worth noting the 26-year-old could have started an adventure on this side of the Channel 10 years ago with Liverpool.

Sitting down with France Football, Soumaoro discussed his career so far, from his regional youth football days to the present, where he opened up about a one week trial he had at Melwood. 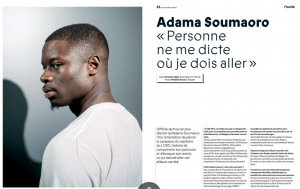 He said: “It wasn’t bad. England, it’s something. I went for a week, but I preferred staying next to my family and my home. I haven’t regretted it at all. At Lille, I took six months to adapt. The hardest was to be stuck inside, not being able to go out, being far from my family, from my friends.

“It was complicated. Wednesday, we were allowed to go on our weekly outing, for a few hours. It was really hard, but I knew there was no other way for me to become a footballer. I threw myself into it, to do it until the end.”

That he did, and while Lille have had their ups and downs, the 26-year-old has remained a near constant of late when not nursing a knee injury, helping the Ligue 1 side to a likely second place this year.

Would his career have gone the same way had he moved to Liverpool all those years ago? Probably not, but it does appear they wanted him for their youth team at the time, seeing as he ‘doesn’t regret’ turning them down.

Maybe we’ll finally see him in the Premier League next year, although with Lille in line for a Champions League campaign, he might stay that one extra season.