Anderlecht made a trip to Alkmaar for a six-day preseason training camp on Monday and Albert Sambi Lokonga wasn’t expected to make the trip to the Netherlands due to Arsenal’s interest.

Het Laatste Nieuws now explain the 21-year-old didn’t board the bus to the Netherlands.

His absence didn’t surprise anyone since it was mutually agreed in advance and it was also his wish to not resume training with the Jupiler Pro League side.

After holding talks for months, Mikel Arteta’s side and Anderlecht are close to agreeing a deal now.

The 21-year-old, for his part, has already found an agreement with the north London club.

Vincent Kompany’s side wanted a fixed fee between €18m and €20m, plus bonuses and also a percentage from the player’s future sale. HLN state the two clubs are ‘finalising the final details’ of the deal these days. 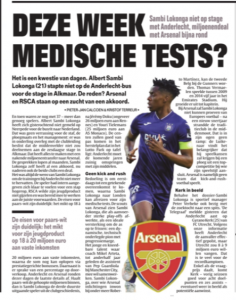 Anderlecht’s aim is to ‘reach a signed agreement soon’ with Arsenal, after which Lokonga can travel to London to undergo medical with the Premier League side.

With the deal to take Lokonga to Arsenal ‘almost complete’, the player is waiting to travel to London for his medical and HLN believe he could make that trip to English capital this week.