On Monday, Leeds United confirmed Ezgjan Alioski has left the club as a free agent, after their efforts to reach an agreement over a new contract weren’t fruitful.

The Premier League side had identified Barcelona’s Junior Firpo as Alioski’s successor, and Mundo Deportivo now claim the Dominican ‘will be a Leeds player today’.

Junior’s arrival at Leeds United is ‘directly related’ to the North Macedonian’s departure from the club.

The former Real Betis man travelled to England a few days ago and Mundo say he completed his medical tests with the Premier League side on Monday.

The player also ‘complied with photo sessions’ at his new club, and signed contract with Marcelo Bielsa’s side yesterday. The transfer will be announced later today. 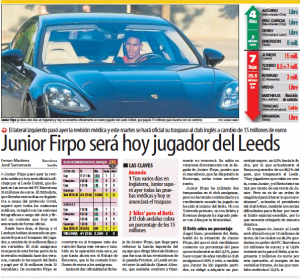 According to the newspaper, the Catalan club and Leeds had ‘reached the preliminary agreement’ worth €15m plus bonuses for the Dominican’s transfer, and with that, Barca were able to recover part of the investment they made in Junior’s signing in 2019.

Mundo also state Ronald Koeman’s side will have to pay part of the fee [€2m] from Junior’s sale to Real Betis.

Newcastle in contention to sign Bundesliga man – ‘Interesting offer’ would...