Home Europe Player wants to be pulled out of preseason trip – Transfer to...
SHARE

AS once again sound very confident about Dani Ceballos moving to Tottenham this summer.

The Real Madrid player has been repeatedly linked with a move to Spurs as he looks to move away from Zinedine Zidane, who doesn’t have a great deal of faith in the midfielder’s readiness for his starting team.

Ceballos does, however, have a lot of faith in his long term Real Madrid prospects, so has been looking for a loan without the destination club having a purchase option. This is acceptable for Spurs, explain AS, and that suits both the player and his club.

Mauricio Pochettino is said to have spoken to the 23 year old and explained the project on offer at Tottenham last season, and, as Poch often manages to do, it’s left the situation positive. 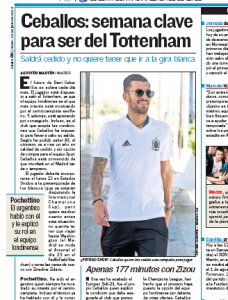 AS state this is a key week in the potential deal, and explain Ceballos doesn’t want to join Real Madrid on their preseason trip in the US.

Due to the Euro U21 championship, which Spain won, he’s only due to report on July 22nd, and would prefer his move to be finalised before then.

Everton look set to miss out on player, club ‘ever closer’ to deal – Could be unlocked tomorrow morning

City Group in talks for two Brazilian youngsters – One would...

Everton look set to miss out on player, club ‘ever closer’...