Crystal Palace and West Brom scouts were spotted at Porto’s league game against Feirense this Sunday. The officials’ presence is reported by both O Jogo and A Bola today.

But the newspapers don’t seem to know who the emissaries were specifically watching, and with a disappointing 0-0 on the pitch, there was not much to be impressed with either.

Porto’s best player was the left-back Alex Telles, who was constantly responsible for creating attacking plays and even managed a few shots. 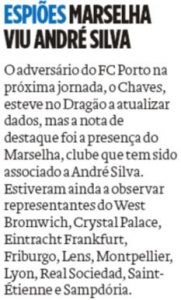 On Feirense’s side, their defense was vital for the draw, and centre-backs Ícaro and Flavio Ramos, besides midfielder Cris, were those most praised by the local press.

Old West Brom target Laurent Depoitre keeps being left aside by the club and didn’t make it to the matchday squad.

The draw was pretty bad for Porto in the title race. As Benfica also couldn’t win on Saturday, this was the chance to close the gap and be only one point behind the Eagles. But the result have kept them separated by three points with four fixtures to go.