Plucked from Toulouse by Barcelona a year or so ago, Jean-Clair Todibo spent the second half of the season away from the club on loan at Schalke 04.

Despite playing regularly until a groin injury stopped him from doing so, the Frenchman wasn’t kept by the Bundesliga side despite their option to do so, and he returned to the Catalan club.

He now waits to see what his future holds, but it’s fair to say his trajectory could have been very different had Manchester United taken the chance to sign him when it was offered to them.

The centre-back sat down with Onze Mondial for a long interview about his career so far, and was asked to recall his early days, where he went on various trials around Europe.

Ahead of being signed by Toulouse, he explains ‘multiple’ possibilities were made available to him, including one from Manchester United.

The magazine then enquired about his trial with the Red Devils, to which he replied: “It was crazy! I went from Les Lilas to United. It was a dream that was coming true when I hadn’t done anything, really. It was just a trial. Everything went well, but I wasn’t taken. 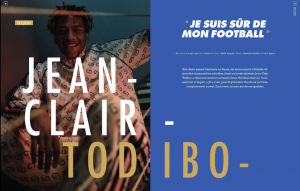 “I don’t know why my trial didn’t lead to anything. I still haven’t received an explanation to this day”.

Now seen as one for the future if he develops well and fulfils his clear potential, Todibo is being tracked by a number of clubs around Europe, including the likes of Everton.

If he does eventually make it to the Premier League and succeeds, perhaps then Manchester United can kick themselves a bit.