Vitória Guimarães’ clash with Arsenal is probably their biggest challenge of the season, so the Portuguese press is about to hype up the game a lot this week.

To start with it, newspaper A Bola brings today a story about Marcus Edwards, who spent over a decade in Tottenham Hotspur’s youth ranks.

They present the game as a special occasion for him, since he’s yet to impress at Vitória Guimarães and should now have a special boost for this game.

They take all the goals he’s scored for Spurs against the Gunners, at various levels, and say the challenge ‘couldn’t be more appetising’ for him. 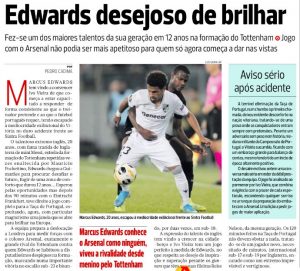 Having arrived at Vitória on a free move last summer, Edwards has made only three appearances for the club so far, and is still to have a convincing performance since his move from Tottenham.

Despite the bigger enthusiasm from the winger for this game, Vitória are not facing Arsenal at a great time in the season.

Besides being in very bad form, the Portuguese side will also be missing two of their most important players for their trip to London.