Over the past few days, there has been a surge of articles suggesting that Tottenham are taking a serious interest in Hellas Verona’s Antonin Barak.

The Czech Republic international, who was previously a target for the likes of West Ham, has impressed greatly this season, scoring 11 goals and assisting another four in 29 league appearances, which appears to have caught the eye of Spurs.

It’s no secret that Antonio Conte wants more depth in his current Tottenham squad, and the 27-year-old would certainly provide that at a reasonably affordable price.

Corriere di Verona have a big article on Spurs’ desire to sign Barak on Wednesday, making sure to tell their readers that ‘London is calling’ for the club’s star.

It’s pointed out that all his attributes, ranging from his ability to run, his intensity and ‘propensity for goals’ are all things that ‘Conte has kept an eye on at a distance this season’.

Despite Verona’s decision to block all offers in January, this summer is very different, as his sale is ‘almost certain’, with the money potentially coming in from it seen as ‘useful for reinvesting in and consolidating the foundations of the club’. 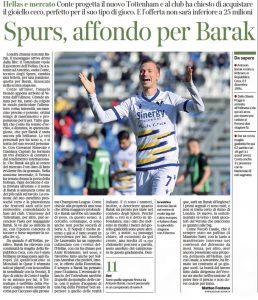 The hope is also that Tottenham’s interest in Barak can ‘light up the auction to sign Barak’, starting fro €20m upwards with the ‘concrete hypothesis of touching and perhaps exceeding the threshold of €25m’.

Corriere di Verona explain that ‘Conte’s type of football is tailor-made for him’, and the club is one ‘among the elite in the Premier League’.

That being said, Tottenham aren’t the only ones after him, because Napoli are ‘very attentive and have already come forward for him previously’.

In short, the outlet believe that Conte ‘has asked’ Tottenham ‘to buy the Czech jewel’ and the offer ‘will not be less than €25m’.

Something to keep an eye on, because it’s rare for the local press to go this big on something they don’t believe in.