What started as an idea by Il Messaggero last week has quickly developed into a full story in Italy, and it appears that Lazio are very seriously considering making a move for Sunderland’s Fabio Borini.

Relegated to the Championship with the Black Cats, the 26-year-old appears reluctant to play in England’s second-tier next season, and with few Premier League sides seemingly interested, a return to his home country seems like the likeliest option.

Corriere dello Sport explain his versatility, capable of playing down the wing as well as up front, is of great interest to the Serie A side, as is the fact that he is Italian.

Capable of being a valuable asset in the 3-5-2 Simone Inzaghi likes to play, his price is also very attractive for a Lazio side who will play Europa League football next season. 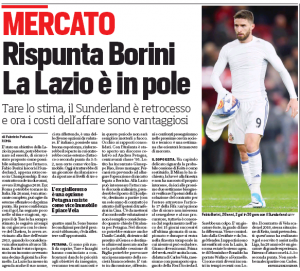 With Sunderland making it very aware they have a lack of financial strength to compete in the market, letting Borini go would make sense, clearing his wages in the process, with Il Messaggero quoting €7m as a potential price.

He is on Lazio’s list, and with Borini very much looking for a way out, this could be a match made in heaven.