Barnsley currently find themselves 23rd out of 24 teams in the Championship.

The only club below them are crisis hit Derby County, whose total has already been hit by a points deduction. If it wasn’t for the mess which has long been unfolding at the Rams, Barnsley would be rock bottom.

Markus Schopp was shown the exit door at the beginning of this month, after losing seven matches on the bounce. Since then, Barnsley have been looking for a replacement, and it’s perhaps more of a rocky road than they will have hoped for.

Monday’s edition of HLN, a Belgian newspaper, covers the club’s ‘concrete interest’ in Wouter Vrancken, who is currently in charge at Mechelen.

Such is Barnsley’s interest in the 42-year-old, they contacted the Belgian side, but were met with a very firm and clear ‘No’. 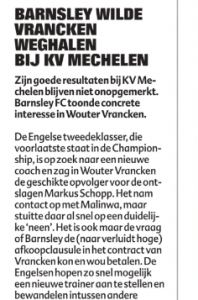 take Vrancken. The exact figure of the manager’s release clause isn’t shared, but it’s described as being ‘high’.

Mechelen are currently fourth in Belgium’s first division, so it’s questionable whether Vrancken would rush to leave anyway.