In their Thursday edition, French newspaper L’Equipe explain Alban Lafont has been Espoirs (France U21) goalkeeper since 2019, almost by default.

Lafont has been the only player with the No.1 position secure at his club, and has therefore had the role all sewn up. However, it’s stated he hasn’t always been convincing, and now he has serious competition in the form of Leeds United’s Illan Meslier.

As Marcelo Bielsa’s side have enjoyed a good start to life in the Premier League, the 20-year-old has played every minute. There’s been some shaky moments, but given how young the goalkeeper is and his lack of experience, he’s easily done enough to show he has lots of talent to develop.

This gives France U21 manager Sylvain Ripoll another serious option, and he’s quoted by L’Equipe as saying: “We are delighted to see Illan at this level, he finished last season well and started the new one very well. We will see how things develop. I can only be happy to see starting goalies, which has not always been the case with the U21s.” 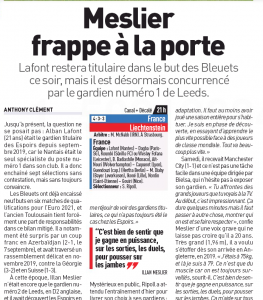 Meslier, who surely can’t be far away from getting a chance with his national selection, is clearly thrilled with his Leeds United role, saying: “I’m super-happy to be playing at this level but I don’t consider myself a real Premier League player yet, because it takes adaptation. It takes at least a full season to get used to it.”

Lafont must know he position is under threat, and it will provide even more motivation for Meslier.