The Thiago Almada saga continues its merry way in Argentina, as Velez Sarsfield are uncomfortable with his rejection to sign a new deal with the club.

Newspaper Olé has an update on the situation today, and what’s very interesting is that they say the player’s rebellion has a lot to do with the interest from Manchester City.

For the first time, at least in the stories we’ve seen, it’s said one of the reasons why Almada didn’t sign a new contract because Velez Sarsfield didn’t accept to sell him to the Premier League side this summer.

It’s been widely reported that Manchester City offered around €10m to sign the winger, but Velez Sarsfield asked for his €16m release clause to be paid. 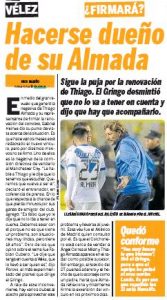 Velez Sarsfield’s intention was to give him a new contract and raise the clause to €25m, but Almada and his agent haven’t agreed to that so far.

Since the player’s contract expires in less than an year, we should soon have developments in this case, which could go either way.