Today, we covered a piece from Portuguese newspaper A Bola which said West Brom will work to sign Filip Krovinovic in case they get the promotion to the Premier League.

Following his loan spell from Benfica, it’s said the Baggies are depending on a new budget to make his move permanent in the summer.

But we must consider that this transfer depends on the other side as well, and Record brings an interesting point of view on the situation today.

They say Benfica are actually evaluating the possibility of having Krovinovic back in their squad for next season. It’s claimed that the Lisbon side had an ‘internal debate’ about the matter and initially, ‘the scenario points out’ to his return to Estádio da Luz. 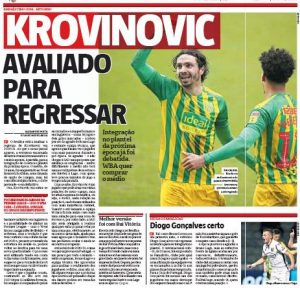 Record confirms that West Brom are interested in making his move permanent, and even says that Krovinovic has been ‘very comfortable’ in England.

The midfielder has a contract with Benfica until 2022, and a return to the club could show him more opportunities in the team. On the other side, the chance of playing in the Premier League is claimed to be very ‘seductive’.

That’s why the newspaper says that his wish should be crucial when the time comes.