Rúben Neves last signed a new contract at Wolverhampton Wanderers in July 2018 and his current deal at Molineux runs until 2023.

Earlier this week, Wolves manager Bruno Lage admitted his side must be prepared for the possibility of losing the midfielder in the summer.

The Portugal international has already been linked to clubs in England and Spain, with Barcelona falling into the latter category.

On April 26th, we covered claims made by Sport which explained the 25-year-old is ‘crazy to join’ the Catalan club in the upcoming window.

It was also explained that Neves’ agent, Jorge Mendes, has already put his client’s name on Barca’s table for months and is working to take him to the Camp Nou.

Mundo Deportivo on Friday relay this and state the super-agent has several Barca players in his client list. The newspaper then goes on to mention the Wolves star, who is also managed by Mendes.

It’s claimed that in recent days, Barcelona’s ‘interest’ in Neves ‘has been strong’. Mundo further add that Lage’s man could become a long-term replacement for Sergio Busquets at the La Liga side. 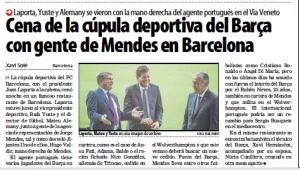 Whether the Barca officials meeting Mendes’ right-hand man gives them an advantage over English clubs remains to be seen.