Eric García is in his final year of contract at Manchester City and despite making it clear he will not sign an extension, the Citizens didn’t allow him to join Barcelona in the summer.

Earlier today, Sport reported the 19-year-old ‘willingness’ to join Barcelona is ‘total’ and they will make a ‘concrete offer’ for signing him in January.

According to Marca, the La Liga side have contacted the centre-back and Lyon’s Memphis Depay to ‘convey their wish’ to sign them in the next window.

With the Spain international, the Blaugrana want to sign an agreement in January, either to join immediately or as a free agent after this season.

Despite setting the roadmap to acquire García and Depay’s services, Josep Maria Bartomeu’s decision to resign as the Catalan club’s president makes these transfers complicated to complete in January.

The power now lies in the hands of Carles Tusquets, the president of Barcelona’s Managing Commission, who on Monday admitted the decision taken by the committee, including signings, can be revoked by the incoming president.

A similar situation happened with Arda Turan’s signing from Atlético Madrid in 2015, where the club was in the middle of the presidential election.

The committee completed the deal after signing a document with Los Rojiblancos, which could allow Barca return Turan to Atlético by paying a fee of €3.5m, if the new president didn’t approve his arrival. Bartomeu was then appointed as the new chief and he allowed the deal to stay.

Turan’s transfer was carried out in the summer of 2015, but deals to sign García and Depay will take place midway through the season. According to the newspaper, the elections will be held in February and Marca states, ‘It cannot be that a footballer is signed, joins Barcelona and then the new president arrives and challenges the signing as he does not consider it appropriate. A challenge that could also lead to a complaint against Tusquets for exceeding its functions. And Tusquets is not going to risk this lawsuit. 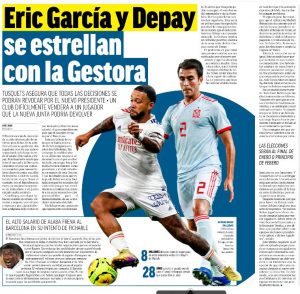 ‘One solution would be to have a document signed by all the candidates accepting the signing of these footballers, but this seems like a utopia.’

The report adds new president having an option to revoke the current committee’s decision on incoming players makes it ‘practically nil’ for new signings to arrive at Camp Nou in January.