Despite being used regularly by Unai Emery during the Spaniard’s stint at Arsenal, Lucas Torreira has found game time harder to come by under Mikel Arteta.

This quickly led to new rumours about an exit from the Emirates, with Fiorentina and Torino the first two clubs to be mentioned with a move.

However, there’s a third club in Italy who could be interested in his services, and that’s AS Roma.

Part of the reason why that’s the case is Arsenal have an interest in Amadou Diawara, who is perhaps a more defensively sound player compared to the South American.

Roma, down their end, are looking for an ‘important midfielder’ to put alongside Jordan Veretout, and while the Guinean has filled that role for now, the Serie A side ‘would be willing to sacrifice him to get Lucas Torreira’, who ‘can’t wait to go back to Italy’.

Having most likely missed out on Thomas Partey, you know, because money, the Gunners have turned their attention to Diawara, who would be less costly. 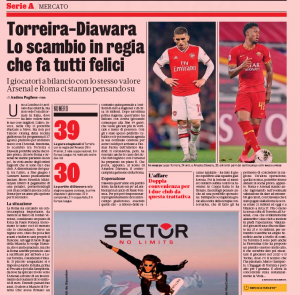 Gazzetta dello Sport, who have a big article on the matter on Thursday, state that what helps the two clubs here are the valuations of their respective players.

Diawara is said to be worth around €17m, which is ‘more or less’ the same as what Arsenal value Torreira, who is around the €25m-30m.

That should help kick off talks, but Roma need to be aware of Fiorentina’s interest, who have ‘offered a very expensive up front loan fee to then buy the player in 2021′.

Torino are also mentioned, but Torreira’s wages are a bit high for them, so it’s really the Florence club vs their Rome counterparts for now.