For West Ham fans, the name Nahitan Nández will be a familiar one, since the midfielder, who signed for Cagliari last summer, has been a name popping up here and there in recent weeks.

He has a €36m release clause in his contract with the Serie A side, which, after an impressive first season in Europe, has helped attract potential suitors.

In need of reinforcements pretty much everywhere, the Hammers have turned their attention to him a few times without ever doing anything about it (for now), and they have since been joined by Leeds United.

The newly promoted club will be looking to make a number of signings for their first-team squad this summer in order to give Marcelo Bielsa the best chances of staying up next season, which means a new striker, and seemingly a new midfielder.

A number of South American players have been touted with a move to Elland Road, and while Nández plies his trade in Europe, he’s still Uruguayan. 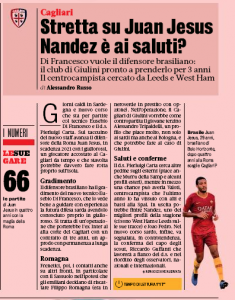 That appears to be the avenue the club are going to help Bielsa as much as possible, and Gazzetta dello Sport state the midfielder ‘could be an exit’ alongside Joao Pedro, before mentioning the names of both West Ham and Leeds next to the former Boca star.

It’s also worth pointing out Bielsa’s side were linked with Nández before his move to Cagliari, so he’s clearly well known to the Argentine manager, and with more money now in the coffers, perhaps they’ve decided it’s time to finally get him.