Multiple reports in Italy have recently linked Liverpool’s Dejan Lovren with a move to AS Roma.

On August 16th, TuttoMercatoWeb explained the deal collapsed after the defender demanded a €1m signing on fee.

Jurgen Klopp didn’t include the Croatia international in the squad for the past two league fixtures or the UEFA Super Cup win over Chelsea. Lovren has lost his place at Anfield and has permission to leave the Champions League winners.

Leverkusen registered a 3-2 victory over Paderborn in the opening game of the Bundesliga and the report states the performance made it clear the German side need to strengthen their defence. 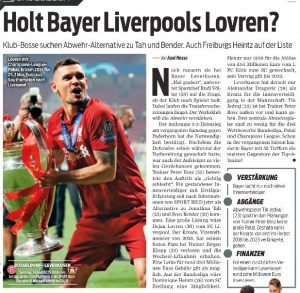 Bayer are looking for a well-established defender, who has the experience of playing at the highest level and Lovren fits the bill.

It’s thought hey have the possibility of signing Lovren on a loan deal for a fee of around €3m.