Fulham had their first bid for Jovane Cabral rejected by Sporting, according to reports from the Portuguese media today.

Newspaper A Bola says the Championship side placed an offer of €10m for the winger, but that wasn’t enough to convince the Lions.

It’s claimed that Sporting really trust Jovane’s potential, and even though they may not receive huge bids due to the economic crisis, they’re not taking less than €20m for the player.

The Lisbon side are in no hurry to sell, so in case there are no good offers this summer, they’re willing to keep him for one more season and then sell for more next year. 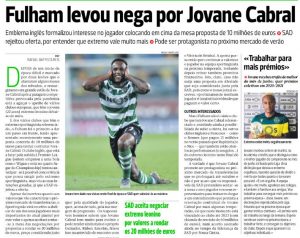 Fulham were the first club to move as they try to avoid the competition for the 22-year-old. A Bola writes that there are other English and French clubs interested in him, including the likes of Nice and Rennes.

Jovane Cabral has six goals and three assists in 29 appearances for Sporting this season. He’s protected by a release clause of €60m.