The Super Lig club’s star player Abdulkadir Omur will only return to the side in March due to injury, and Trabzonspor boss Unal Karaman has asked his board to sign a wide attacker, with Grosicki said to be one of the options.

A decision about who to bring in will be made by Karaman, and Fanatik report the Trabzonspor hierarchy will act when he’s made that decision. 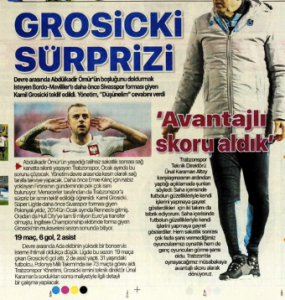 In recent years the Hull City player has been linked with a return to Turkey, and Bursaspor came very close to signing him last year.

Grosicki previously played in Turkey for Sivasspor before he joined French side Rennes in 2014.

The 31 year old has made 19 appearances for Hull City in the Championship this season, scoring six goals. His contract with the English side will expire at the end of the season.