AC Milan have placed a €30m asking price on midfielder Franck Kessié, with Wolverhampton Wanderers and West Ham both repeatedly reported as being keen on the midfielder.

Tuttosport cover the player’s situation today, and claim the player can leave in the January transfer window should an appropriate offer come in.

Kessié has found himself out of favour under Stefano Pioli in recent weeks, losing the starting place that has been his for the last two seasons.

He was first left on the bench for the clash with Lazio at the beginning of November before missing the meeting with Juventus for ‘disciplinary reasons’.

There was a 45-minute appearance against Napoli, but that was due to an injury to Ante Rebić, while he was taken off against Parma this weekend after 79 minutes after he ‘didn’t play very well’.

Milan boss Pioli prefers other players ahead of him, and the club know that, of the players they want to sell, he has the better market.

West Ham and Wolves are both named as suitors, but there is also interest from Italy, particularly Fiorentina and Napoli.

Milan value him around €30m, a figure which would allow them to put good ‘capital gain’ on their books. There’s no mention of whether either Premier League side would be willing to pay that price.

However, it is a move that would make plenty of sense for the Hammers. They are light in central midfield, with only Declan Rice, Carlos Sánchez, Jack Wilshere and Mark Noble the players available to Manuel Pellegrini. 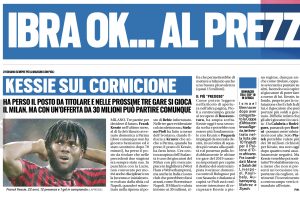 That’s an issue given Wilshere’s continued injury issues, while neither Rice nor Sánchez have provided the kind of defensive steel that this side needs.

Kessié would add that and physicality to a West Ham midfield lacking in all three components and at €30m, could be a gamble worth taking.