Italian newspaper Tuttosport has a story today about the big night Alexis Sanchez should have on Thursday.

With Lautaro Martinez suspended and Romelu Lukaku likely to be rested, the Chilean star is the one who should command Inter Milan’s attack against Ludogorets in the Europa League.

The newspaper also uses the story to talk about the chances there are for the Manchester United loanee to stay with the Nerazzurri next season.

It’s claimed Inter Milan haven’t seen enough from Sanchez so far, especially because of the injury which left him out for a couple of months. That’s why any decision would be premature now. 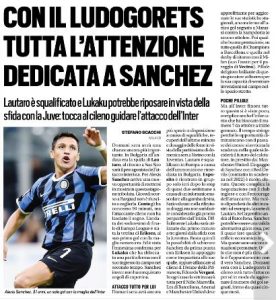 The biggest issue for Alexis Sanchez’ permanent transfer would be his wages, since Inter Milan can’t afford the salary he has in his contract with Manchester United, which runs until 2022.

Tuttosport points out that a bigger chance for this move would be if Lautaro Martinez goes to Barcelona at the end of the season. Then Inter Milan would be able to make a bigger sacrifice and keep the Chilean international in their squad. Still, it isn’t said how much Manchester United would demand for his sale.