Despite shining in the early stages of the Euros in Marco Verratti’s absence, Manuel Locatelli has found himself on the bench more often than not in the following games as soon as the Paris Saint-Germain man returned.

Still, it was enough for Sassuolo, where the midfielder is currently contracted, to use it to make any departure a little more onerous, which hasn’t worked in Juventus’ favour.

Other clubs, such as Arsenal and Borussia Dortmund, however, aren’t as affected it seems, since Gazzetta dello Sport reiterate, having already reported it last week, that ‘from the Emilia club, they speak of two important proposals delivered by’ both the Gunners and the Bundesliga side.

Not only that, but the likes of Paris Saint-Germain, Manchester City and Real Madrid are also ‘involved’, and that’s why Sassuolo have ‘every interest in triggering an auction and selling to the highest bidder’.

While Locatelli has given his preference to Juventus, he isn’t against a move abroad, which he ‘considers very formative’.

Sassuolo, down their end, want €40m in cash, which their Serie A counterparts aren’t prepared to pay, refusing to go over €30m this year and hoping to use a youngster as a makeweight. 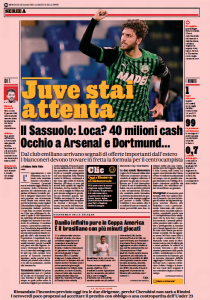 This doesn’t tickle anyone’s fancy in Emilia, though, and Gazzetta state that ‘in a nutshell, if Arsenal, Borussia or other foreign clubs pass from words to deeds’ and ‘satisfy’ the economic request by paying the €40m up front, then ‘it will be difficult for Juventus to reach the goal’.

That line suggests that while the Gunners may have let Sassuolo know they are interested and made what we can only guess is an ‘important’ verbal offer, they haven’t shown them the money yet.

They need to do that before anything else happens.