With every day that goes by, it appears Juventus are heading one step closer to signing Manuel Locatelli from Sassuolo.

The Italy international, who made a big name for himself by scoring two goals against Switzerland at the Euros, has been a target for the Serie A side, as well as a handful of Premier League teams, including Arsenal, for some time now.

The Gunners were brought in after Manchester City, who have been tracking the player for quite some time, and, according to Gazzetta dello Sport, were the first in England to make a move for him.

The Italian newspaper explain that despite Juventus edging towards wrapping up the deal in a cash + one of either Radu Dragusin, Nicolò Fagioli or Felix Correia transfer, Sassuolo ‘have received important offers (without counterparts attached) from Arsenal and Borussia Dortmund’.

Not only that, but they also ‘expect others’.

Therefore, the deciding factor in all this would be Locatelli’s desire, who has previously admitted he wouldn’t mind an adventure abroad if it presented itself. 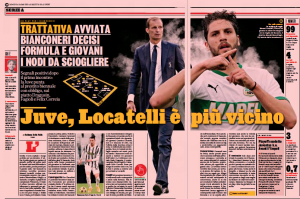 However, ‘he would more voluntarily go to Juventus’, even if, for now, ‘he has asked to be left alone’ as he focuses on the Euros.

How much Arsenal offered isn’t revealed, but it’s no secret that Sassuolo were looking for at least €40m for their star, and that was before he started shining for his country on a global platform.

We’ll see if more details come out in the near future, and will be keeping an eye out for those.