Late last week, we published a couple of articles looking at the situation surrounding Jan Vertonghen and a possible move to Napoli, who were reportedly one of the clubs looking at him for the summer.

The Belgian is out of contract in a couple of months, and with still no decision made regarding his future, the whole thing is a big question mark.

The 32-year-old certainly won’t be short of offers, as it’s already been made clear his agent is collecting them like Easter eggs for his client to look through, but there is one team who appear to have an advantage over everyone else.

That is, at least, what Gazzetta dello Sport state on Monday, claiming that Inter are ‘starting the race from pole position’ for the defender, who would ‘bring great experience in defence’. 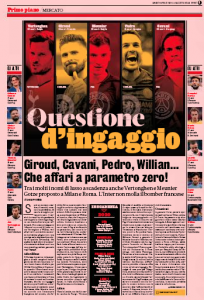 The Italian newspaper don’t give us any information regarding where the player stands in all this, but with Serie A being a league that has a great history to give ageing defenders a second breath for the final years of their careers, it would certainly make sense.

While Inter do have the lead in all this, they will encounter some relatively local competition too, as Gazzetta finish their bit on Vertonghen explaining both Napoli and Roma are working ‘under the radar’ as well to try and sign him.