Alexis Sanchez to Bayern Munich is the flavour of the week.

The Chilean press are very excited, as it would allow Sanchez to team up with Arturo Vidal, and they could win lots of trophies, drape themselves in Chile flags, and create an endless stream of victorious front pages.

Tuesday’s copy of Chilean newspaper El Mercurio shouted out from several pages that Alexis Sanchez is close to a Bayern Munich transfer, they even included figures. El Mercurio said the transfer fee would be $65m (£50m) and the salary offer $14.5m (£11.1m) per season to the player.

German newspaper Bild sound much less hopeful in their Wednesday edition, making it sound like Arsenal have pushed Bayern aside on wages. Bild say, according to their own 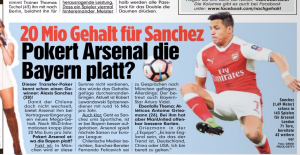 information, that Arsenal have offered ‘just over €20m per season’ to Sanchez.

Some brighter news for Arsene Wenger.