One of the more low key stories of transfer deadline day was Manchester City moving for Valencia youngster Nabil Touaizi.

Valencia regional newspaper Super Deporte reported that Nabil Touaizi was ‘on his way to Manchester’ to sign for the Premier League club. Manchester City had come to an amicable agreement to pay Valencia €350k for the player, plus a further €2m should he make a first team appearance.

Manchester City could have taken the player for nothing, given that the 15 year old isn’t yet on a full professional contract, but they’d have had to pay training compensation. 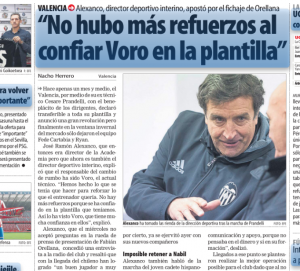 Valencia’s interim sporting director José Ramón Alexanco has been speaking about the switch and sounds frustrated by the situation.

Quoted by Mundo Deportivo, Alexanco said: “The player does not want to be in Valencia. Before he had another agent with whom we had very good communication and support, because they did not think about money… The mother and the agent made a clear decision and the standard is very clear, you cannot fight it.”

Mundo Deportivo say it would have been ‘impossible’ for Valencia to try and keep Touaizi from Manchester City, given him not being on a professional contract and with the agent finding a deal with the Premier League club.