Turkish newspaper Fotomac report Galatasaray will make a move for Liverpool’s Xherdan Shaqiri at the end of the season.

It’s reported Gala manager Fatih Terim has identified the Swiss international as a target and they will knock on Liverpool’s door with a loan bid this summer.

Signed from Stoke City during the 2018 summer window, the 28 year old had a decent debut season with Liverpool. However, in this campaign he hasn’t featured regularly for Jurgen Klopp’s side due to injuries, and Fotomac claim the Merseyside club could look to sell him. 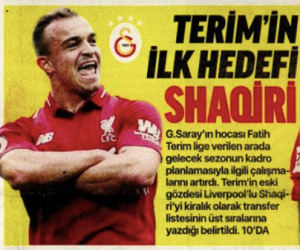 However, due to Galatasaray’s finances, they would struggle to afford a permanent deal for Shaqiri.

Fotomac claim they are ready to make a loan offer, with an option to buy the former Basel winger.

Shaqiri has only managed to make 10 appearances for Liverpool in all competitions this season, scoring one goal. His contract with the Reds will expire at the end of June 2023.